There are two types of city break. There is the Paris-type: where you leisurely stroll from a boulangerie to a cafe, making pit stops at tiny artisanal shops before settling down with an aperitif to people watch and enjoy the day well wasted. And then there are the Mexico City style city breaks, where you don’t know where to start, you don’t know how to carry on going and you do not want to know where the day might end.

Nothing prepares you for the sheer scale of CDMX, as it’s known to the locals. The city itself is home to 18 million people but another seven million or so commute in from the surrounding metropolitan area every day. That’s just the locals. Tourists are limited in numbers in comparison, but nonetheless the city is choked with people, cars and events. Calm is nonexistent. Solitude is impossible. Wherever you look, there will most likely be a small, metal street stall and a small Mexican ready to make you a taco al pastor. The more resourceful ones surround their tiny stalls with tiny plastic stools and spread a temporary tarpaulin roof over them. There are always at least two salsas: roja (red) and verde (green). You need to put your European habit of colour-coding danger aside here: the green salsa is almost universally more dangerous despite its pleasant and mild appearance. And if a taco on the street corner is not your thing, another option approaches in a form of another small Mexican, but this time on a bike, pulling a small metal cart. Circling the neighbourhood from the crack of dawn to well past dusk, this compact local is equipped with a megaphone chanting, like a Latin-American muezzin his culinary prayer: “Hay tacos, tamales, tostadas, elotes…” All through the night the sound of this chant ebbing and flowing with his approach, lulling you to sleep, a strange jet-lag lullaby.

Wherever you look, there will most likely be a small, metal street stall and a small Mexican ready to make you a taco al pastor.

I must be European because most of the street taco stalls did not immediately appeal. So what that the proprietor can heat up the tortilla on their limed-up hotplate, if I can see that the meat has spent the whole day out in the sun, the bacteria just waiting to dance all over it like the skeletons on the Day of the Dead parade. Regardless of everything that I have read about Mexican food, vegetarian options are limited on the streets of the capital. Mexicans are carnivores and a meatless taco does not apparently a meal make. All signs advertising courgette flower tacos turned out to be a bluff despite the piles of courgette flowers lining the lanes at the main market like Mexicans lining up at the US border crossing. All the colourful squashes, plump pumpkins, plentiful mushrooms and ripe tomatoes of the world are here but none make it into the tacos. Perhaps Mexican mamas cook vegetables at home, but their muchachos would rather die than be seen eating anything green on the street. Unless we’re talking the devilishly hot salsa verde, of course.

The soul of the city can be found at its markets. Mexico City’s largest market, La Merced, is the city distilled to essentials.

The soul of the city can be found at its markets. Paris’s Merche del Enfants Rouge is convivial and relaxing with the traders demonstrating just a tiny whiff of superiority over the visitors. Mexico City’s largest market, La Merced, is also the city distilled: a kaleidoscope of colour and smell, dazzling and intoxicating but not without an edge of danger. And believe me, you have not seen chillies until you have visited a Mexican market. I arrived with the smug advantage of having actually had ancho and mulato chillies in my kitchen once, but the tiny, round “Santa Catarina” were a total novelty. I have indeed heard of poblano but would not hazard a guess of what they look like surrounded by other varieties. Chillies are sold here in more than one form – a large part of the market is lined with stalls full of ready-made mole paste. You buy your favourite by the kilogram, take it home where you add broth, your favourite protein (meat of course, if you trust the mole-maker I spoke to) and voila – dinner is ready.

This market of plenty whetted out appetite. Charlie, always gastronomically braver than I am, sat down on a tiny, plastic stool joining two local muchchas and asked me to order him precisely what they were tucking into. The stall owner, a tiny indigenous woman with a baby in a sling, was stuffing blue corn tortilla dough with bean paste before pressing it to create a large, oval tortilla which she then fried stiff before scattering it with nopales (cooked opuntia leaves), coriander and queso fresco. She finished it off with sprinkling of your preferred colour of salsa. A salty, spicy, crunchy piece of heaven known as tlayuda.

A salty, spicy, crunchy piece of heaven known as tlayuda.

The ladies we joined at the stall were delighted to see us enjoy their local favourite. They went on to recommend us a taco stall nearby at the market and a restaurant in the centre of town but most of all they recommended that we put away our cameras and hide away the gold jewellery because not all corners of La Merced are friendly, especially to “people like us”. We did stick out like a pair of sore thumbs – paler, taller, more lost than other shoppers – we spent half a day at the market and did not bump into another tourist. It’s lucky I only found out later that the market is known as the city’s prime destination not just for food but also for prostitution, drug dealing and violent crime. You won’t find any of those in the “top 10 things to do in Mexico City” on your favourite travel blog.

If you do frequent “Top 10 things to do in…” you will no doubt stumble upon Xochimilco – a successful tourist trap. Before we dive into why it’s a tourist trap, I should probably mention that Mexico City was built on a lake. Had the Aztecs not been methodically murdered by the conquistadors, chances are that Ciudad de Mexico would today resemble Venice’s much bloated, more bacchanalian cousin: the area’s pre-hispanic inhabitants were prime water architects. With time, not only were the Aztecs annihilated but their lake was also built upon, so today only a few glimpses of the aquatic metropolis remain. One such remain is Xochimilco – a collection of canals and swamps which carved itself a niche of boat trips and flower growing. A choir of well-travelled friends highly recommended a trip to Xochimilco and ensured me that the canals were lovely and that a boat ride on them will be a relaxing and pleasant break from the city’s general madness. And indeed – this true. In parts. The canals are indeed peaceful and quiet, truly Mexican in their colourfulness and the boats are the best way to experience them. What nobody warned me about was the level of skill required to swat off the overly keen, illegal tour operators.

The moment we stepped off the suburban train, a small Mexican (this, as you might have noticed, is becoming a theme) on a bike hitched himself onto us like a thistle hitches itself onto a dog’s tail. We tried losing him by meandering the streets in the most roundabout way. We tried boring him with taking photos for longer than inspiration would realistically allow. We spoke Eastern European dialects at him. He remained unfazed, always in our footsteps, peddling about four yards behind us. Twice he attempted to direct us to his amigos with boats. The amigos were not keen to disclose either the price or the route and were outraged when we walked away.

We were also accosted by a plastic flower-crown seller, a selfie-stick merchant, a canned drinks vendor, a taco cart (on a boat!) and, my personal favourite, a muchacho with a boa constrictor in a cage.

Split second after we found authorised boat rides (with the price clearly displayed, the terms and conditions available in two languages) another exemplar of Mexican resourcefulness became apparent. Our trajinera (the colourful boat so common on the canals) had not yet left the dock, when from all sides we were attacked by offers of beer, corn on the cob and, of course, a Mariachi band. We went for the beer and the corn but our refusal to accept a serenade meant that over the next hour at least four other bands attempted to sell us their talent for a mere 150 peso per song. They were not alone – throughout the trip we were also accosted by a plastic flower-crown seller, a selfie-stick merchant, a canned drinks vendor, a taco cart (on a boat!) and, my personal favourite, a muchacho with a boa constrictor in a cage. All of them on the narrow trajineras and all of them chasing each tourist boat hoping that a more inebriated or gullible group will find itself in need of a selfie stick or a snake. This description might sound at odds to my earlier statement that it was calm and peaceful, but you have to remember – everything is relative and in comparison to the hectic, jostling crowd in the city centre, the plastic flower crown seller and the Mariachi bands qualify as subdued entertainment.

I am at a risk of falling asleep as I write (altitude sickness, jet lag?) but feel that no Mexico City article would be complete without a quick mention of Frida Kalho, because how can you? Go to Mexico City and not mention Frida, I mean. Frida’s home, known as La Casa Azul (the Blue House), in which the artist was born, lived and died is both beautiful and immeasurably sad. In many ways it resembles her paintings – it is full of colour and exquisite details but you can tell its occupier was frequently haunted by her own thoughts. It never really occurred to me just how literal Frida’s paintings were until I sat in her garden and breathed in her surroundings. Yes, her works are a prime example of surrealism, but her art is a direct representation of her thoughts and feelings. These are rarely ordered, logical or easily explicable to others. Frida’s mind was just as beautiful as it was melancholy and you can feel this in her home. The museum is certainly worth a visit, but be prepared for the overcrowded spaces – the house is big by normal living standards, but more of the eight-people-over- for-dinner type big than a tourist-hoard-dying-for-a-selfie-at-the-front-door big. I enjoy artists’ homes. I loved Hemingway’s Finca Vigia in Havana and one of my favourite museums is Kettle’s Yard in Cambridge. I felt that if La Casa Azul allowed half the people at each entry, you would feel the soul of this home even more. You could stand for a moment in silence, take in the bird song and enjoy the superb light, but even with the crowd it’s one of the calmest places in this overwhelming metropolis. 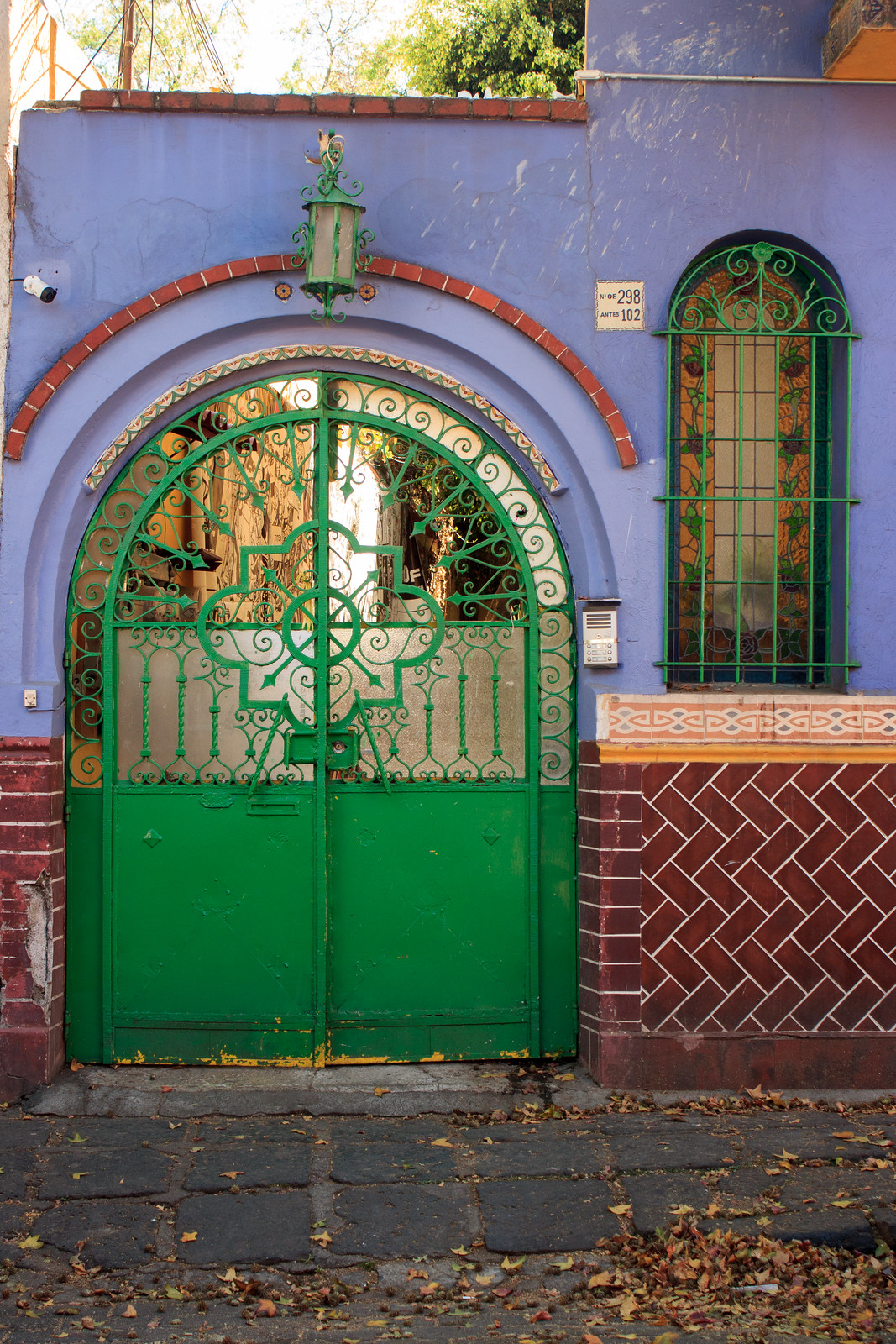